Back to News & events

Over a year ago on March 16th 2020 the Torbay Community Helpline was launched to match people who need help with people who want to help during the COVID-19 crisis. They took the first calls from people worried about the impending lockdown that followed exactly a week later, on March 23rd. 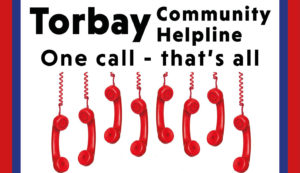 Initially, it was all about shopping and prescription pick up from pharmacies, with a rapid response team made up mainly of Torbay Community Development Trust (TCDT) Community Builders joining queues that waited patiently for hours outside chemists. It wasn’t long before it was recognised that the needs of people isolated in their own homes went way beyond food and medications and the Helpline evolved accordingly.

A mental health triage service was developed for those really struggling and as the economic consequences began to bite hard, financial assistance was also added for those people who suddenly found themselves up against it.

The Torbay Food Alliance pulled together more than ten foodbanks from across Torbay to source food on an enormous scale, which was no mean feat in the early days when cheap and bulk food became ever more scarce.

The Helpline has taken just short of 19,000 calls and has been contacted by 5,800 people – around 4,500 requesting help and an incredible 1,300 people offering their help to others.

More than 470,000 meals have been delivered, at the rate of around 10,000 a week, to individuals and whole families – many of whom have never struggled to put food on the table before.

The helpline was there for nearly 700 people whose mental health has suffered through the crisis and provided a way out of isolation with a telephone befriending service for hundreds more.

More recently, TCDT helped ensure the vaccinations were delivered quickly and efficiently at the Riviera Centre in Torquay with hundreds of volunteer marshals. To date, 61,684 people have had their jabs, an impressive 45% of the population.

“Everything we have done has been in partnership, whether that be with the other charities and organisations already mentioned, Torbay Council and the Torbay and South Devon NHS Trust, and many, many more,” said David Gledhill, TCDT Marketing & Communications Lead, “But most of all, the effort has ultimately relied on our volunteers and as well as celebrating one year, we would like to find a way of commemorating it so that the kindness is never forgotten.”

An inclusive, innovative and independent champion for the aspirations of local people